What Are Health Inequalities?

Health inequalities are often measured with reference to variations in life expectancy, outcomes for different diseases or health conditions, and access to services.

The World Health Organisation has a Health Equity Assessment Toolkit which allows users to explore health inequalities for particular countries and regions across a large number of indicators. 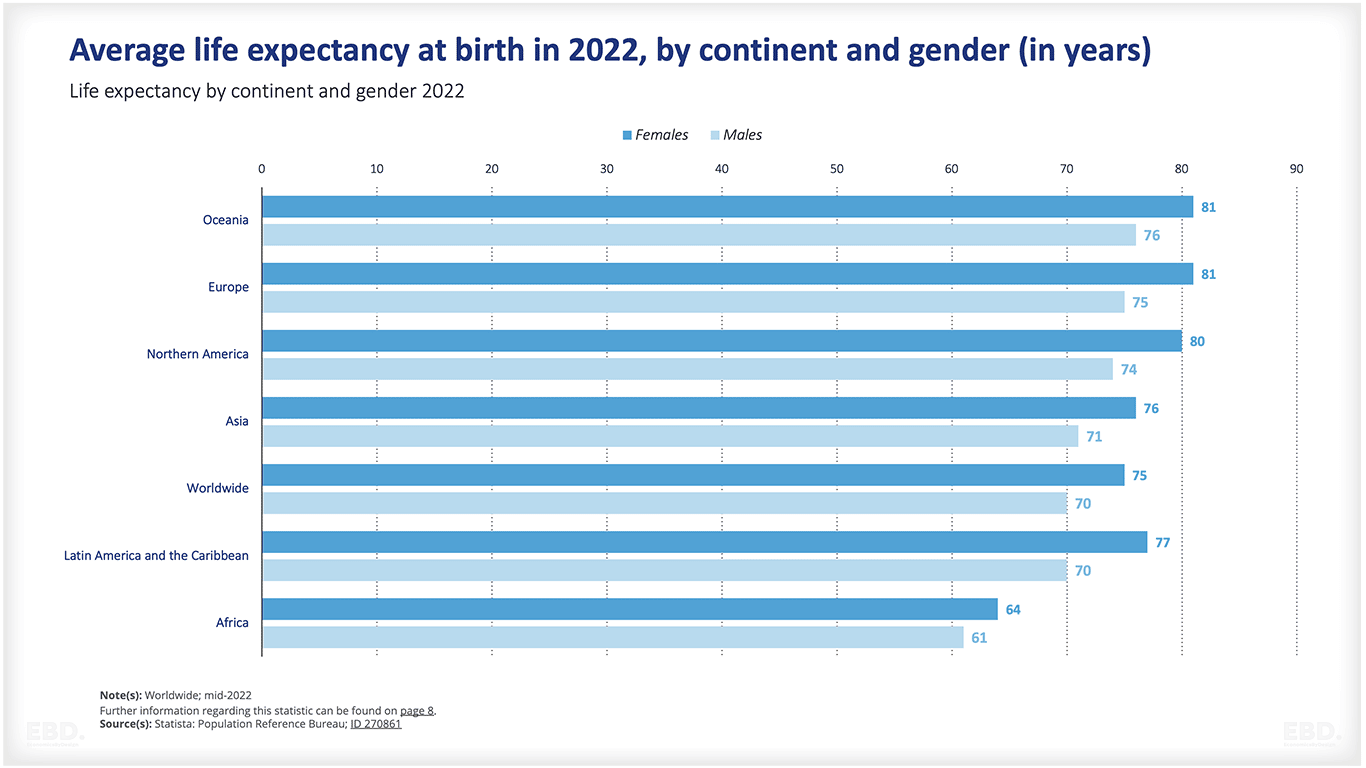 Life expectancy is influenced by a number of factors including education, income levels, access to medical care, and lifestyle choices. Individuals with higher incomes and educational attainment are more likely to have better health outcomes than those who do not.

Life expectancy can vary within continents, countries, regions, localities and within neighbourhoods. For example, according to the Office of National Statistics in the UK, the gap in life expectancy at birth between local areas of the UK was 11.3 years for males and 8.7 years for females 2017-2019.

Life expectancy can also vary by income. Global life expectancy at birth is estimated at 73.3 years (WHO, 2019). However, this ranges by 11 years, from 76.3 years for upper-middle-income countries, to 65.1 years for low-income countries. The World Health Organisation estimates the children from the poorest 20% of householders are nearly twice as likely to die before their fifth birthday as children in the richest 20%.

Healthy life expectancy measures the number of years a person can expect to live in good health. It is indicative of physical and mental health, as well as access to healthcare and lifestyle factors such as nutrition, exercise and smoking habits. Like life expectancy, healthy life expectancy is often used to assess disparities between population groups within countries

Health conditions vary significantly between different populations. Often, these differences are a result of health inequalities that exist between population groups, such as disparities in access to healthcare and/or lifestyle choices.

The Institute of Health Metrics and Evaluation (IHME) Global Burden of Disease data 2019 provides a rich source of comparative data and data visualisation tools which enable country comparisons of diseases and their impact on health status.

The Global Burden of Disease Data demonstrates the serious and disproportionate risk of poor health outcomes from communicable diseases, maternal and neonatal conditions and nutritional conditions facing the population in Africa, compared to other parts of the world.

Variations in the health impact of the COVID-19 pandemic has highlighted health inequalities across the world. A Lancet study (McGowan et al, November 2022), reported the results of a review of studies globally and concluded that there was consistent evidence from different continents and countries that COVID-19 mortality rates were higher in areas of socio-economic disadvantage than in affluent areas.

A recent initiative from the Academy of Medical Sciences (2022), reported that across 25 case study countries, as well as gender and sex-based inequalities, population groups who were disproportionately affected by COVID-19 included:

Contributory factors included housing overcrowding, the type of employment and in particular key worker status, low income and inability to isolate. All of these resulted in differential exposure to COVID-19. In addition, variation in access to testing, vaccination and treatment as well as differences in lockdown conditions; for example risk of exposure to interpersonal violence.

Why Do Health Inequalities Exist?

Health inequalities exist for many reasons. Analysis of the determinants of health shows that variation in social circumstances and the environment explain almost one third of the variation in health outcomes, with variation in access to medical care accounting for around 11%.

These are drivers that can be influenced by government policy with the aim of reducing health inequalities. Variations in individual behaviour account for over one third of variation in health outcomes; these include issues relating to smoking, substance use, diet and nutrition, physical exercise. Insofar as harmful behaviours are correlated with socio-economic characteristics, these too are often considered important drivers of health inequalities and can be influenced by public health campaigns and interventions.

Should We Try to Reduce Health Inequalities?

A recent IPSOS survey in the UK published by the Health Foundation suggested that the general population in the UK thinks that it is important for government to act to reduce health inequalities, particularly where it relates to differences in income and geography. 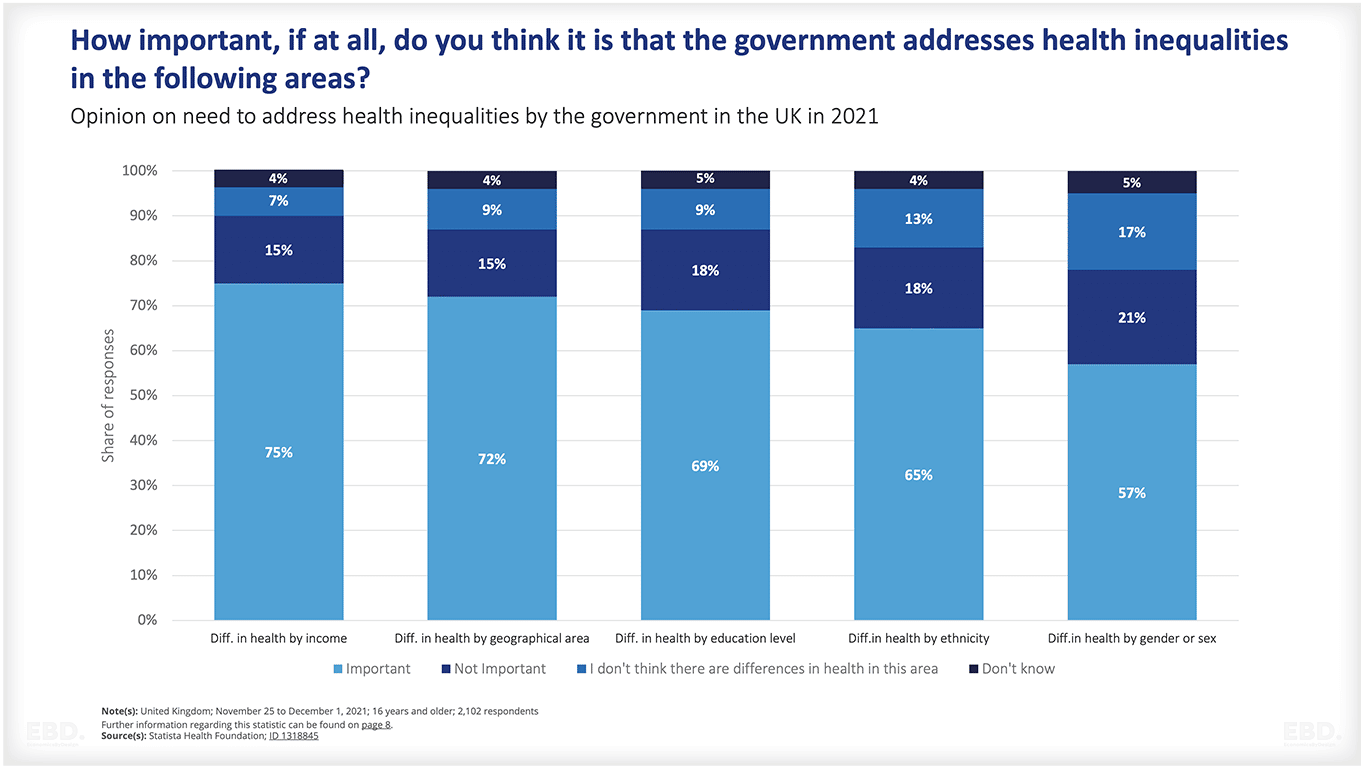 What Is The Economic Cost of Health Inequalities?

In the UK, a study published in 2014 by the Institute of Health Equity, from Frontier Economics, estimated that health inequalities in England resulted in:

The combined estimate was not far short of 65% of the total NHS budget.

A study of the economic cost of health inequality across Europe (Mackenbach et al, 2011), suggests that health inequelities result in a 1.4% loss to the economy (as measured by GDP) per annum.

What Can Be Done to Reduce Health Inequalities?

Governments have an important role to play in tackling health inequalities. National and local policies that aim to improve education and employment opportunities and improve housing conditions, can help reduce the root causes of health inequalities.

At a national and local level, public health initiatives aimed at improving lifestyle choices, such as providing access to healthier food options or smoke-free zones, can also help to reduce health inequalities.

The expansion of health financing coverage through government funding, social or private insurance to include under-privileged and/or low income populations is an important lever for reducing health inequality where this is caused by poor access to health services.

Whilst there are examples of countries with strong national policies to tackle health inequalities, in general the majority of countries lack the governance and policy frameworks to address these issues comprehensively.

A recent review of initiatives across Europe (Barsanti et al, 2017) concluded that there is “a weakness of governance system for the majority of countries in terms of evaluation actions and of impact of interventions in reducing inequalities, and the difficulties in having a clear and integrated vision between the national and regional levels”. Progress has however been made in France, Portugal, Poland and Germany.

The World Health Organization has developed the Health Equity Policy Tool to guide countries on the range of multi-sectoral policies and interventions that could be initiated to reduce health inequalities. 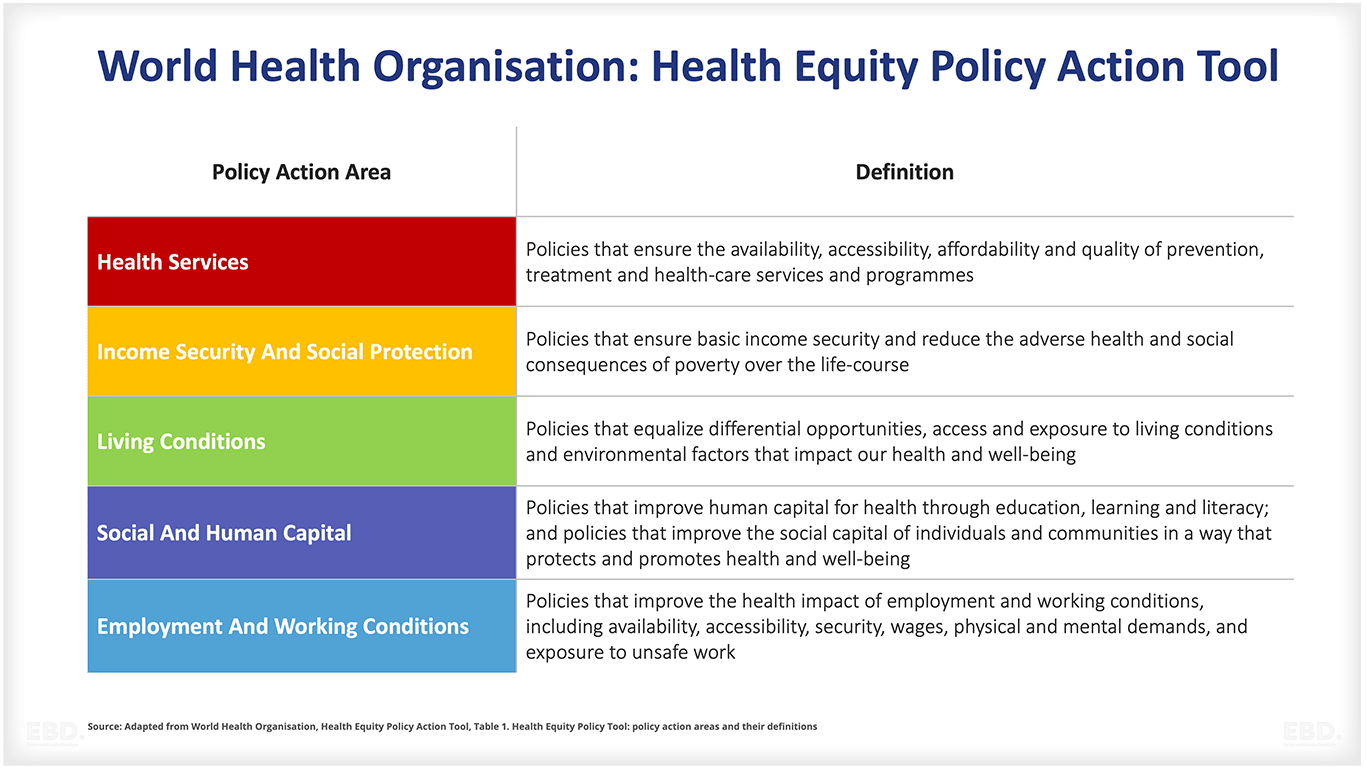 The tool includes a set of indicators that policy makers can use to monitor the impact of these initiatives.

Health systems and their partners can play a part in reducing the impact of inequality on health outcomes. For example, reducing health inequalities is one of the national goals of the NHS in England and the new Integrated Care Systems.

The Core20Plus5 initiative, which is also led by NHS England, is a very focused initiative aimed at supporting the development of national and local actions and targets to reduce health inequalities.

Those responsible for designing, commissioning, and delivering services are required to develop and target interventions at the CORE most deprived 20% of the national population, PLUS population groups at a local level with particular needs / challenges, groups with protected characteristics (these are defined by the Equality Act of 2010), groups experiencing social exclusion, and inclusion health groups including people experiencing homelessness, drug and alcohol dependence, vulnerable migrants, Gypsy, Roma and Traveller communities, sex workers, people in contact with the justice system, victims of modern slavery and other socially excluded groups, across 5 clinical areas, namely maternity, severe mental illness, chronic respiratory disease, early cancer diagnosis and hypertension.

Local areas are being encouraged to use this framework to develop initiatives targeted to improve health outcomes for these populations, and hence reduce health inequalities.

How Can Research Help?

Research can help us to better understand the root causes of health inequality and identify successful interventions that can be scaled up to reduce disparities worldwide.

By sharing data and findings, we can learn from each other and work together to create a more equitable world where everyone has access to quality healthcare.

The COVID-19 pandemic has stimulated interest in global research initiatives which should improve collaboration and actionable knowledge.