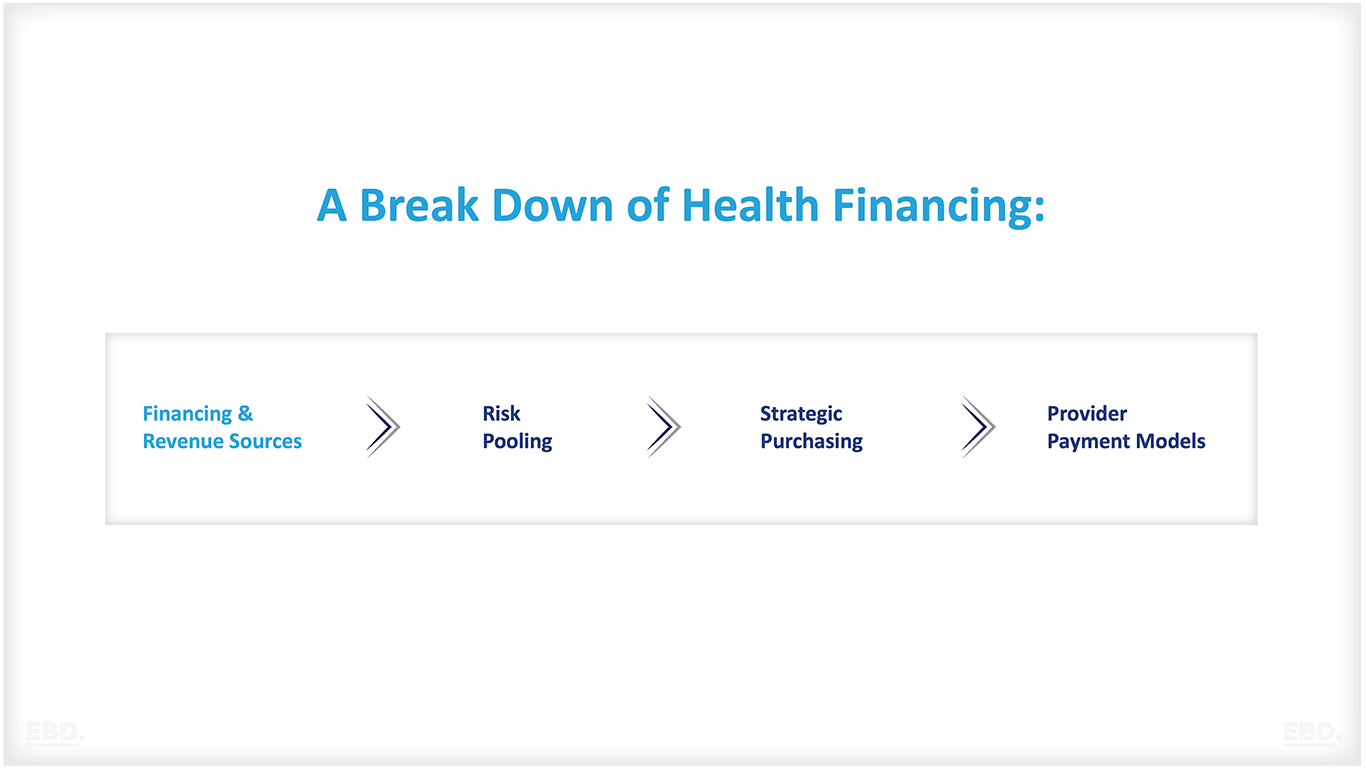 Health financing is a critical enabler of Universal Health Coverage (UHC). It ensures that people can access the universal coverage for health services they need without suffering financial hardship.

There are many different ways to flow funds through the health care system, but all systems have four basic elements:

Funds gathered at scale can be pooled together in a way that allows them to be used more efficiently and effectively. This means that the risks of needing healthcare are shared among a larger group of people, which helps to keep costs down. Pooling can be done through a single fund for a whole health system, regional funds for sub-national systems, or multiple funds for specific population groups.

Pooled funds are used to purchase health care services for a group. This can be done directly by the government or through private insurers. It includes making contracts with providers, setting prices, and ensuring that quality standards are met.

Providers (such as hospitals and doctors) need to be paid for the health care services they provide. This can be done through a variety of models, capitation, block funding, line-item funding, fee-for-service, case-based payments, or a mix of some or all. It can include incentives to improve performance or conditional on achieving pre-agreed outcomes.

The focus of this economics lens is on the financing and revenue sources.

How is Healthcare Financed?

There are many different ways to achieve UHC, but all require a mix of financing mechanisms. The most common way to finance health care is through a mix of public and private sources. 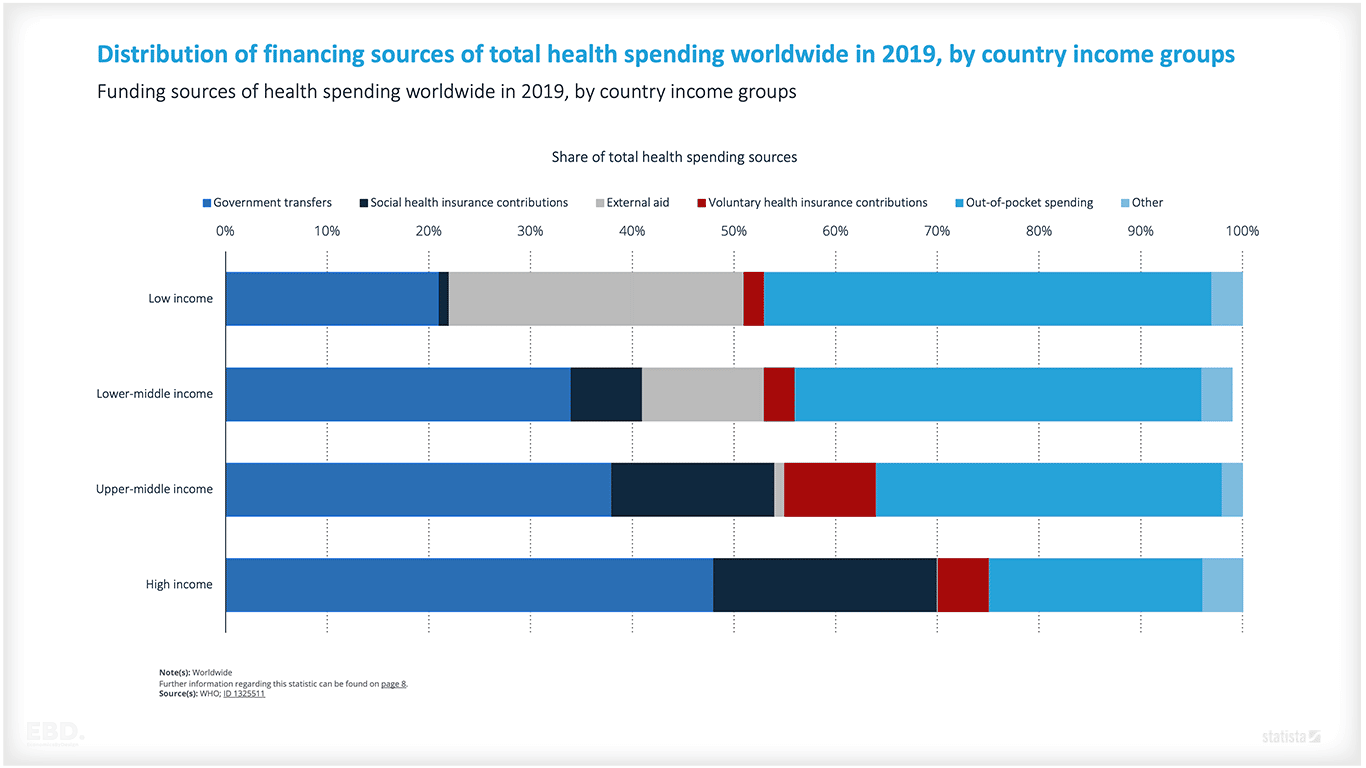 This is the most common method of health financing in high-income countries. Taxes can be used to finance healthcare directly, or they can be used to co-fund social health insurance programs.

Examples of countries using general taxation to finance all or part of their healthcare system include:

This is when people purchase insurance schemes voluntarily. This is often from a private company to cover healthcare costs. This method of health financing is common in countries with a mix of public and private healthcare and is used proportionately more in upper-middle income countries than elsewhere.

This is when people or organizations donate money or resources to support healthcare services. This is an important source of health financing for many healthcare organizations, especially in low- and middle-income countries.

Examples of healthcare organizations that rely heavily on philanthropy include Médecins Sans Frontières (MSF, or Doctors Without Borders), the Global Fund to Fight AIDS, Tuberculosis and Malaria, and the Bill & Melinda Gates Foundation.

This is when people pay for healthcare services directly from their own pockets. This is often done for services that are not covered by social health insurance.

According to data from the World Bank, out-of-pocket spending has fallen globally from 19.28% of total spending to 18.01% (2019). However, some countries have very high levels with Armenia Afghanistan Turkmenistan Myanmar and Equatorial Guinea having over 75% of health spending financed by out-of-pocket payments.

There are three common models which combine these health financing models and are often used to classify health systems.

The Beveridge Model, named after Sir William Beveridge, also known as the National Health Service (NHS) model, is a healthcare system where healthcare is provided by the government and funded by taxation. This system is common in many European countries such as the United Kingdom, France, Spain, and Portugal.

In the main, health care is available free at the point of use. This can result in patients overutilizing the health system but this risk is usually managed through pro-active prevention programmes, and the use of primary care and effective triage to select patients for treatment in order of priority. This helps to manage demand across the system.

The Bismarck Model, named after Otto von Bismarck, also known as the Social Health Insurance (SHI) model, is a healthcare system where healthcare is provided by the government and funded by social health insurance contributions. Some of these systems have many insurers but the prices and health benefit packages are heavily regulated or managed by the government.

This system is common in many European countries such as Germany, Belgium, and Switzerland. This system works well for the employed but it requires a financial ‘safety net’ for unemployed, retired and other citizens who are unable to afford contributions.

The National Insurance Model, also known as the mixed public-private model, is a healthcare system where healthcare is provided by both the government and private sector. In general, however, the financing comes from government-run insurance programmes that every citizen pays into.

This system is common in many countries such as Canada, and the United States of America (medicare). These systems can result in high costs and long waiting times, and the complex and varied arrangements with private providers can result in poor care coordination and patient responsiveness; although this is not a result of the financing itself.

Why Can’t We Rely on Out-of-Pocket Payments to Finance Health Care?

There are several challenges associated with financing healthcare solely through out-of-pocket payments:

This is when health care costs exceed what a household can afford to pay. This can lead to financial hardship and even poverty. The World Health Organisation and the World Bank Monitoring Report on Financial Protection 2021, report catastrophic health spending using two thresholds; when out-of-pocket expenditure is above 10% or 25% of household income. Some studies have used different indicators for example where out-of-pocket spending is above 40% of non-food consumption.

The table below shows that the size of the population facing catastrophic health expenditure was increasing even before the COVID-19 Pandemic.

This is when healthcare costs push a household into poverty. This occurs when out-of-pocket healthcare expenditure exceeds a household’s capacity to pay, and they are forced to use other means, such as selling assets, to pay for healthcare.

Why Can’t We Rely Solely on Private Health Insurance to Finance Health Care?

Countries with mature health insurance models such as the United States of America have a plethora of choices available to citizens in terms of health plans. Plans can vary in terms of:

The market for health insurance is significant and global. 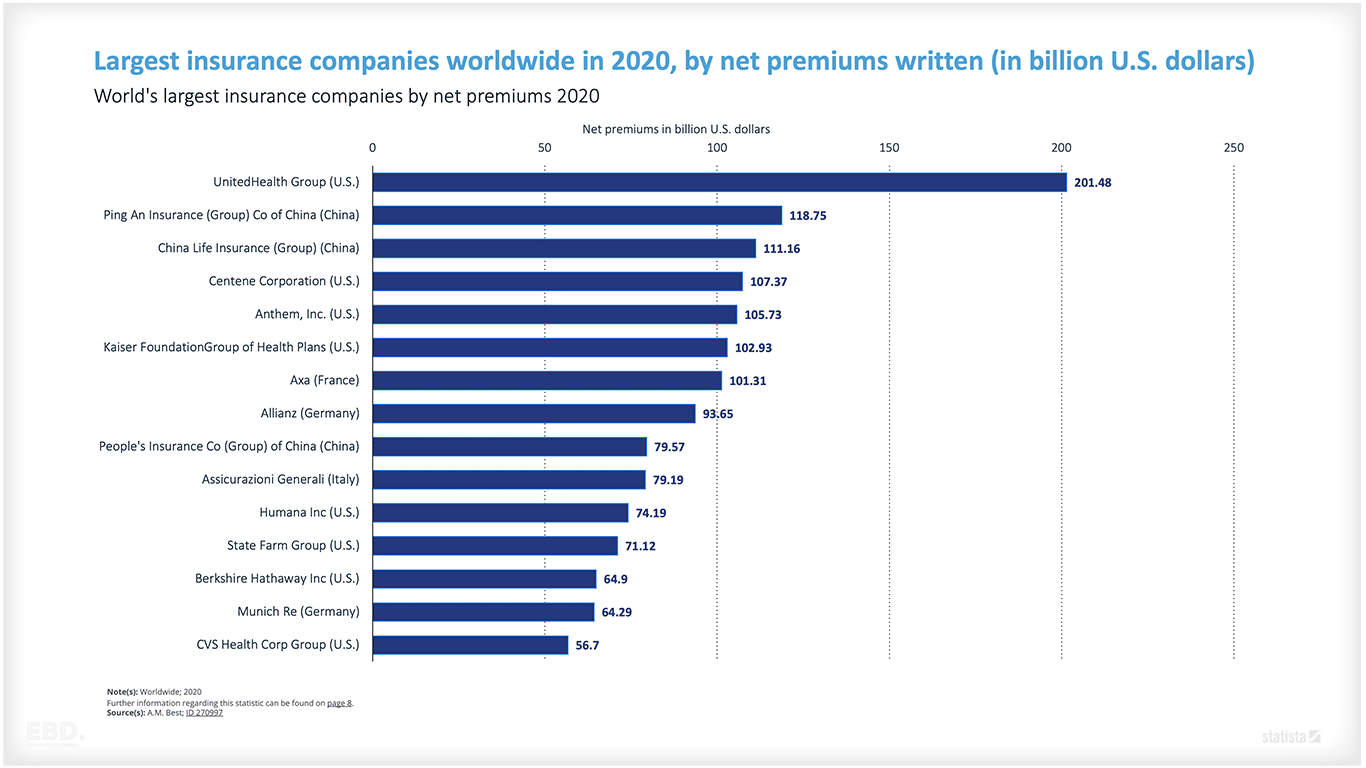 There are challenges with health insurance, which can make it difficult for everyone to obtain and maintain coverage. These challenges include:

The cost of premiums

Health insurance premiums can be very expensive, especially for those on low incomes. This can make it difficult for people to afford coverage.

The cost of deductibles and co-payments

Deductibles and co-payments can also be very expensive, which can make it difficult for people to afford healthcare.

People with pre-existing medical conditions often have difficulty obtaining health insurance coverage. This is because insurance companies may view them as being too high-risk and therefore not worth insuring.

Even if people have health insurance, they may not have access to healthcare. This is because there may not be any healthcare providers in their area who accept their insurance.

Health insurance companies can cancel people’s coverage if they get sick or have an accident. This can leave people without healthcare and struggling to pay medical bills.

Health insurance coverage can also simply expire, which can leave people without healthcare. This can be a problem for people who have chronic conditions or who need ongoing treatment.

Why can’t we rely solely on government funding for health financing?

The cost of healthcare

The cost of healthcare is constantly increasing, which can make it difficult for governments to keep up with the funding needs of healthcare systems. Healthcare costs increase as the population grows and life expectancy increases, new treatments become available, and consumer expectations rise.

During times of economic downturn, government revenues decline. This can make it difficult for healthcare systems to maintain their current level of government funding. Government funding also has to compete with other government spending priorities such as defence, education, police and criminal justice, and critical infrastructure.

In low-income countries, high levels of local inflation can also reduce the government’s ability to secure international supplies of drugs and other health service consumables.

Political instability can also lead to healthcare funding being cut or redirected to other areas. This can make it difficult for healthcare systems to function properly. Countries in fragile or conflict-affected settings often find themselves reliant on funding from international agencies, governments of other countries, or philanthropic organisations. These donor agencies may only have the scope or authority to fund specific programmes or emergency health services.

What Are The Potential Benefits of a Mixed System of Health Financing?

Mixed health financing systems can increase access to healthcare by providing people with a choice of how to finance their healthcare. This can make healthcare more affordable for people who might not be able to afford it otherwise.

What Health Financing is Recommended for Integrated Care Systems?

There is no one-size-fits-all answer to this question, as the best health financing system for integrated care will vary depending on the needs of the healthcare system and the population it serves.

Whilst a mixed system of health financing, which combines private and public sources of funding, might maximise revenue to support an integrated care system, the flow of funds through the system needs careful consideration if the goals of population health and integration are to be achieved.

Pooling, resource allocation, purchasing strategies, and provider payment mechanisms are all important levers for ensuring that the resources find their way to the right part of the system quickly and efficiently.

Loading...
wpDiscuz
4
0
Would love your thoughts, please comment.x
()
x
| Reply
We use cookies on our website to give you the most relevant experience by remembering your preferences and repeat visits. By clicking “Accept All”, you consent to the use of ALL the cookies. However, you may visit "Cookie Settings" to provide a controlled consent.
Cookie SettingsAcceptAccept All
Manage consent